0992. Hugh Masekela
Home Is Where The Music Is 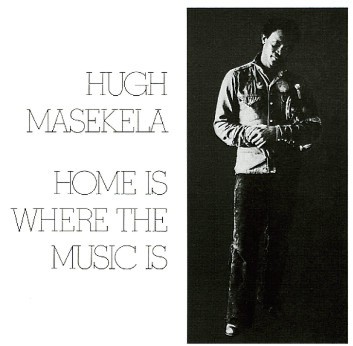 Being an anti-apartheid activist, Hugh Masekela left South Africa after the Sharpeville Massacre (about the same time Miriam Makeba was made stateless by the racist regime (fun fact: Makeba and Masekela were married for a couple of years, and one of her songs appear on this album)) and started a prolific recording career (releasing 43 albums in 49 years) and this is his thirteenth.

Home Is Where The Music Is seems to have been categorized as afro-jazz mainly because of some of the titles and that one track, Ingoo Pow-Pow (Children's Song), where the album's only vocals reside, is a take on a traditional South African kid's tune. Definitely a afro-jazz tune, but one tune doth not an album make.

As for the rest of the tracks on the double album it's pleasant jazz, stretching to, on average, the eight minute mark. Just to mention one track I got to say that Part Of A Whole swings real nice.

[Fact check: if you listen closely and are well-versed in South African folk, you can apparently make out fragments of folk songs in the melodies of some of the tunes, but to my ears this sounds like American jazz - similar to Coltrane's]