The main issue I have with this album isn't the uniteresting pop but that Aguilera's voice is a cross between yarling and wailing, i.e. she sounds like Eddie Vedder if he'd been a Mousketeer with a pop/R&B career.

An unfair comparison would be to Britney, but as we've only heard Brit's debut this far and not the "more mature" albums I won't go there. A better comparison (though maybe still not fair) would be Michael Jackson as they're both targeting the same demographic. The reason I thought about it was the track Cruz which sounds like Christinas attempt at creating her own Man In The Mirror, at least in the feel of the song.

So, how does she fare? Well, twelve million units sold of a pretty decent pop-album dealing with abuse, empowerment and sex isn't horseshit, I'll tell you (even though there are some almost embarrassing moments). She's no MJ, but could do a lot worse. Two more songs and she could have split it in two albums that probably would have been equally as successful.

Christina Aguilera ‎
Back To Basics 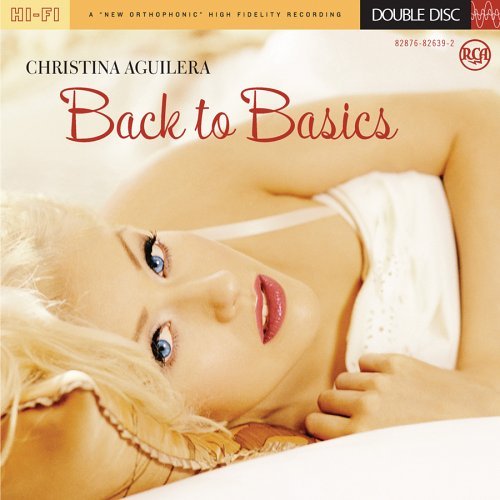 Well then… Yesterday's replacement album and this one has a couple of things in common: first, they both replaced a previous album on the list by the respective performers; secondly they're both by women who looks back in music history for inspiration.

But that's pretty much where the comparisons end, cause where Amy was elbows deep into the retro-soul, it's very clear that Christina's just visiting retro-jazz while trying out a new niche.

And it's not that much new stuff even.

After the explanatory titular Intro with shoutouts to the old-time greats, the double album is mostly her standard pop touched up with either big band jazz or other oldie elements. Combined with a production that's as slick as ever it's an album without much friction.

The one track where there's any kind of traction is Oh Mother, and it's actually a track that makes the whole album listenable.