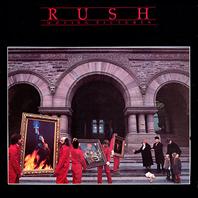 Brave enough to still play progressive rock during the Eighties, Rush is one of the few that actually survived the era.

They're a skilled band, and tight as few, but the singer sounds halfway to Smurfville and the music's more technical than emotive, so Moving Pictuers isn't anything that'll go into rotation on my decks any time soon (and it's telling that the review in 1001 Albums You Must Hear... spends two thirds of the text dealing with the previous album).

In spite of this the fourty minutes of the album just breezes by, and is actually kind of nice to listen to.