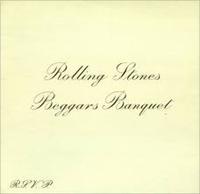 The problem with putting the greatest song of the album first is that it's just going to go downhill from there. And while it doesn't have to be such a steep decline (here on Beggars Banquet it evens out pretty quick), you're still made painfully aware that the apex of the album's gone by.

But that note aside I do understand why teens turned to the Stones instead of the Beatles - there's much more raw power here. Not necessarily in the form of brutal music (it's rhythm and blues, country and a bit of gospel, actually - with a blues cover called Prodigal Son, by Robert Wilkins), but more sex and mysticism.

A good album, and if you haven't heard Sympathy For The Devil it's your loss, but now you know what to do.