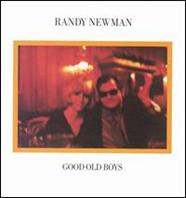 Randy Newman's a musical trickster and while I see, and often appreciate, the point of impersonating a racist when mocking the racists it does get tiresome after a while.

Especially when the sarcastic songs are almost indistinguishable to what could actually have been written by an inbred racist: Redneck could have been a redneck anthem and it and Back On My Feet Again is "balanced out" by more sentimental or socio-political songs like Louisiana 1927 (which, by the way, made its return into the limelight after the New Orleans got thrashed by hurricane Ketrina).

It's just Poe's law in effect.

While I favor the broader approach over this attempt at a concept album, it seems he gained a lot of fans, cause this was his first big selling album.

Funny how things sell once you drop a bunch of n-bombs in 'em.