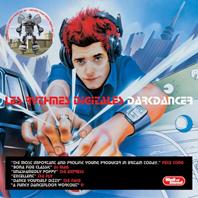 I get chills down my spine when this starts. House.
Luckily he's grabbed a bit of Eighties funk and electro, so I can at least snicker a bit.

In the final track, Damaged People, there's an almost subsonic click that is less heard in the ears than felt in the pallet when listening through a good set of headphones.
That sound's the height of the album, actually. Second place is Soft Machine.

Apparently, I'm not the only one uninterested in Darkdancer as it seems to have gone almost under the radar at the time of its release and only became interesting after the guy behind the name started doing remixes for people like Madonna.

More interesting though, is his image creation at the time: a guy from England pretending to be French just to cash in on the French house wave (with acts like Daft Punk in high demand) and roleplaying it so hard he gave interviews in French.