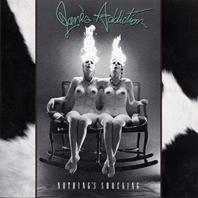 A lot of phase shifting and grandstanding could make this a cock-rocker to despise, but you know what? Jane's Addiction holds it together (or maybe disintegrates just enough) to make it into the repeat-listening section of the list with at least parts of the album (in spite of some truly bad lyrics showing up at times).

Ted, Just Admit It..., from which the album's title is lifted, is a slowly simmering tribal/funk rock (I can hardly believe I actually wrote those words [although I'm not surprised to find 1001 Albums... also writes along those lines) track that builds for a couple of minutes until it blooms out for the rest of the seven plus some minutes.

They were onto something here, but, as he's another frontman with delusions of grandeur, Perry Farrel caused a huge rift in Jane's Addiction when he demanded an equally huge chunk of the royalties (and got it).

But in-band politics and moral clauses aside, Jane Says still is a stirring song and Nothing's Shocking's a good album.