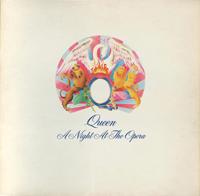 Okay, so I've previously claimed some albums to be "all over the place", but A Night At The Opera might actually take the cake. It's not just that Queen's playing folk/country in '39 and metal in the next track (Sweet Lady), but that they're doing those kinds of jumps constantly throughout the album.
But at the same time, while faux music hall in Lazing On A Sunday Afternoon quickly going over into the hard rock of I'm In Love With My Car could be confusing, it's actually quite seamlessly done. Even when they're kicking out some progressive in The Prophet's Song.

They finally take the final step and throw it all together in one song (which of course became one of their signature songs as well as one of those songs everbody's heard and like), the first single and also everchanging Bohemian Rhapsody. A monster of a track, it's six minutes of up to 180 layers of song and music, with genrebending all around.

This follow up to Sheer Heart Attack proved they could go even further into the stratosphere of popular music, getting loved by just about everyone at the time.
(As a bonus, I've finally learned the name of bassist John Deacon as he wrote You're My Best Friend - the second single off the album and also a huge hit.)