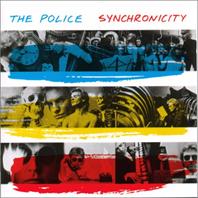 The albums introduction, Synchronicity I, is like an upbeat version of Mike Myer's theme from the Halloween movies. And while you could argue that this was the slaughter of The Police as a band as it's their final release, it's still a pretty awful simile.

The albums not terrible though, even as it cotains some truly horrible segments. Cause seriously, the ode to dinosaurs called Walking In Your Footsteps is almost laughable. I get the intention, but the attempt is seriously flawed.

And, oh man, with Mother they destroy what could have been a magnificient track just by delivering the vocals maniacally. If guitarist Andy Summer just had performed his vocal duties with a psycopathic tone similar to Sting has in Every Breath You Take plus a bit of held back rage it would have been honestly scary.

But on the flipside there is Syncronicity I and II, the aforementioned Every Breath You Take and Wrapped Around Your Finger - songs that combine their pop music skills with Stings convincing delivery.