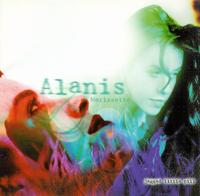 Holy smokes! This album won four Grammys? And got six nominations? That's just wierd. Okay that it sold a lot, but Album of the year?

Of course it all started with You Oughta Know, the outing / revenge track about the guy from Full House (not the funny one). And with music by Red Hot Chili Peppers' Flea and Dave it's the only bit of solid rock on this album.

The other songs are more complacent than that venomous first single. Even when the tempo is turned up (as in Not The Doctor, for instance) it's like they forgot the fuzz-box somewhere.

The worst part of the album is of course that crapola Ironic, the song that's the reason two generations of humans doesn't know the meaning of the word.
Once and for all: It's not fucking ironic that it rains on your goddamned wedding day, it's just an annoying coincidence.

[But, as 1001 Albums You Must Hear points out, this was a big step to get women accepted in rock by the mainstream public, so you might want to listen (once) just as a check on what all the hubbub was about.]