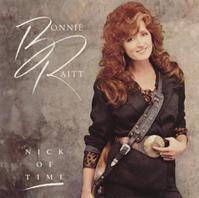 Okay, here's the thing: when someone's posing with a guitar on the cover of an album labeled as blues rock, I expect at least some riffing (or in this case, some serious slide solos).

Simply put, there's somethng missing here, and while there are some harmonica stuff that kicks it (like in The Road's My Middle Name) Nick Of Time is mostly just pleasant and non-intrusive.

It mostly feels very Eighties pop-country instead of blues and sadly not so interesting.