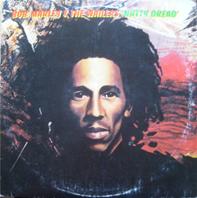 It's a wierd feeling when the songs on an album are both familiar and strange at the same time. This of course is due to the fact that most of the major tracks are more often heard in their versions off the Live! and Babylon By Bus live albums.

This is the first album without the other two original Wailers, but it's equally good:
We've got Lively Up Yourself and No Woman, No Cry, and we've got Rebel Music (3 O'Clock Road Block) and Them Belly Full (But We Hungry) (referenced by every musician with revolution on their minds - among others of course Rage Against The Machine), and they're all just as good as you'd expect.
The difference is that they, due to my mind's association with the live versions, sound slower.

Fun fact about the album: two thirds of the tracks are listed as not written by Bob, but instead by his wife Rita or their friends. This is said to be caused by a contractual dispute where Marley tried to snub his old label of money. This later on caused problems as Rita (as widow) had to sue to get his name back on there (and the money).
Okay, so maybe not ha-ha fun fact, but, you know.