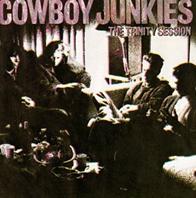 An album recorded with the band huddled around a lonesome mic, set in a church, and they had (just like everyonoe else who've ever recorded in a church) lied their way in, claiming to be godfearing Christians recording a Christmas album.

But unlike others the Cowboy Junkies seem to have behaved and didn't record naked or something like that. They didn't even recor anything offensive, but just alt country / slow rock songs.

Nothing wrong with that, though, it's just that Margo Timmins and Natalie Merchant just have something that makes their voices seem similar [fact checkk: when Cowboy Junkies recorded the two decade anniversary version of this, Natalie Merchant was one of the guest musicians].

It's a low key album and it's wholly okay, from the traditional songs and covers, to their original songs.