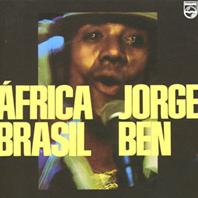 Samba-funk? Samba-funk! When the Brazilians are good they're good and this is an example of just that.

Jorge Ben had made his solo debut within the Tropicália movement (y'know, with Os Mutantes and others) and evolved his sound with each album. This, his fourth, is a cool one, with tracks dedicated to the near-mythic Xica Da Silva and Quilombos-leader Zumbi (in the title track) as well as Taj Mahal being copied by Rod Stewart for use in "his" Do Ya Think I'm Sexy (a crime for which he got sued and settled it by giving his royalties to UNICEF).

While I still haven't learned Portugese, this makes me want to check out the samba-funk scene for real.