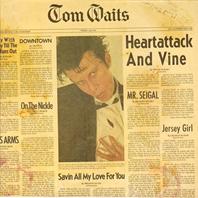 Before he became the wierd uncle of popular music (you know, the one who sort of grunts when he talks and always rummages around for some pots and pans for the thing that's gonna "fix everything"), Tom Waits had a knack for a bit more traditional music.

Some evidence for this is that Jersey Girl off this album became a staple of Bruce Springsteens live-sets. One of his best faring albums, Heartattack And Vine is a set of songs with the grimy Waits narrative set to blues rock / bar-band music, and it's pretty good.

The aforementioned Jersey Girl is, along with Saving All My Love For You, a bit oversentimental (which, I guess, is why they're popular), but for the most parts the rest of the tracks are less strings and more rambling - just the way they ougth to be.