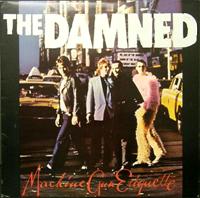 They were the first BritPunks to release a single and an album, tour stateside (inspiring the harcore scene), and have a charting album. This is their third release, and a very good comeback after the previous broke them up.

It's of course high-energy and a bit of hostility to things as religion, and promoting a bit of anarchy (getting a song banned by the Beeb in the process).
It's also surprisingly varied for an early British punk band. A bit of psychedelia and pop's mixed into the shredder and out plops something they called Machine Gun Etiquette.

The Damned are still around, by the way, a bit of personnel and style changes as well as a couple of break-ups, but they're still out there.