0801. The Mothers Of Invention
We're Only In It For The Money 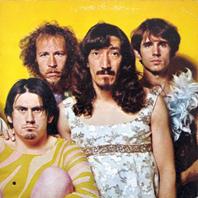 No, this isn't a rerun of the Supergrass album, this is a whole other story altogether. Firmly planted as far away from the hippies and squares as possible, The Mothers Of Invention despised both groups and this concept album kicks both ways with sarcastic, caustic perfection.

Their prime target became The Beatles, as Sgt. Peppers… (probably this list's most referenced album) was released while The Mothers were in the studio and I do understand them - the commerce around (and within) The Beatles must have been the single most annoying thing for anyone creating anything even remotely alternative at the time.

Musically they're all over the place and lyrically they go from summing up the hippie experience magnificiently in Who Needs The Peace Corps, to the core of the poodle, as Faust said, with What's The Ugliest Part Of Your Body?.

A bit censored by the label (thanks, MGM), neither the planned cover art (a pastische of Sgt. Peppers) nor a couple of lines from a lot of the songs could be found in their correct place.