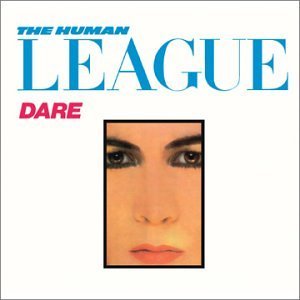 One thing I really like about doing this list is getting the opportunity to re-evaluate some (a lot) of the bands I've written off as "novelty" or one hit wonders cause I've never heard more than one song by them and not found it so interesting that I've burrowed further.

Case in point: The Human League are mostly known (to me) by their hit Don't You Want Me about a guy sort of claiming ownership over his ex cause he supported her for a while before she made it (her rebuttal's there too).

The song I missed by not listening to more of them before was The Things That Dreams Are Made Of - a track I now wonder why it never appear on any radio stations. It's got a good enough melody and it name-checks The Ramones (by first names only). Looking it up I see that there's actually a couple of modern-day remixes of the song, so I guess I'm not the only one who likes it.

There's a couple of other tracks that are kind of cool too, but they don't quite reach the level of The Things That Dreams Are Made Of.

Well done for a band that just had seen two of its three members leave to form Heaven 17.