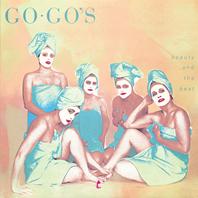 Brilliant! Here's a huge reason to take on a project like this:
The chance to get to hear the originals of good songs. This time it's This Town by The Go-Go's - a track I didn't even know was a cover, but only had heard as a RealAudio bootleg (remember those, kids? of course you don't. the times of the 36.6 modem are long gone) of a demo(?) by The Human Waste Project and Korn's frontman Jonathan Davis.

This accessible new wave debut is notable maybe not foremost due to the above mentioned detail, but that Beuty And The Beat hit the top spot of the US Billboard top 200 as the first all-woman band that wrote all their own material (courtesy mostly of guitarists Charlotte Caffey and Jane Wiedlin).

They also scored a huge hit in the form of apparently the very danceable We Got The Beat, and the ode to cheating, Our Lips Are Sealed, co-written with The Specials' Terry Hall.
Also: what the..?! Belinda effin' Carlisle was in this band?