0711. Billy Bragg
Talking With The Taxman About Poetry 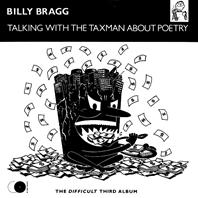 Overtly political and very emotional, Billy Bragg isn't a discreet guy. Alongside songs of (lost) love he rages against society's oppressive values and structures (including, but not restricted to, classism, marriage, and nationalism).

The country song Wishing The Days Away seems off, though. Just like Honey, I'm A Big Boy Now it would have gained from not veering from both the stripped down and the protest singer forms.

Proving you don't need a huge production to convey your pathos, Levi Stubbs' Tears is by far one of the best songs on the list by way of conveying emotion.
It's just Bragg, his guitar and, for a while, a trumpet.