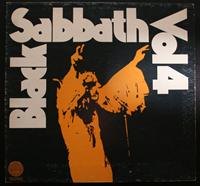 This is an album I just can't help turning up the volume on. Black Sabbath's fourth album follows tightly in the steps of the debut and its follow up in being heavy, legendary and quite frankly awesome.

Okay, both you and I know I'd lie if I said that Changes was a great song, but it's okay. It also sets the scene for a lot of the other album content, cause this is a more personal album where they've pretty much left the occultism behind (as stated in Wheels Of Confusion) and there's actually both self-empowerment songs (Under The Sun) as well as some helpful relationship advice (in St. Vitus Dance).

But perhaps it's telling that the two tracks I enjoy the most are the seriously tripped out Supernaut (no other song has succeded in having someone waving a spoon in it and still sound so cool, yes I'm looking at you, Soundgarden) and the cocaine overdose of Snowblind - fantastic tracks.

Yep, I think the boys got their third Got To Get here.