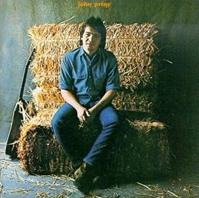 Now this is the real counterculture country! Listening to John Prine makes me realize what I've been longing for on the other hippie-country albums: expression of actual subversive lyrics.

Releasing a song about a heroin addicted war veteran (Sam Stone) during the height of the Vietnam war in a genre seen as the voice of the conservatives is a pretty sly move. This is tricking The Man to listen to your words by setting them to his music. Excellent and rather effective.

And repeating the feat with a comedic track (Your Flag Decal Won't Get You Into Heaven Anymore) starting the B-side is just genius, cause if they don't get the one that's dark as night, they'll fall for the one that'll make 'em laugh.

But there's no only songs with a raging anti-war sentiment here, there's also the hopelessness of love (Far From Me), reminiscience about childhood days with his pops (Paradise), and of course his signature song about pot (Illegal smile).

With a voice at times reminding me of Willie Nelson and lyrics that goes from grave to giggles John Prine's the go-to guy of the day.