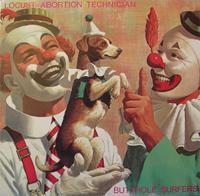 Oh my! Opening with a wonderfully irreverent remake of, or perhaps more of a zombie attack on, Black Sabbath's Sweet Leaf-riff in Sweat Loaf is gutsy and rather brilliant.

Uneven doesn't even begin to cover this album, by the way, cause there's some really heavy metal chugging crashing headlong into no-fi and ending up in remixed Thai pop (and the chopped 'n' screwed segments of Kuntz flips between being impressive and just being off, ruining a song) but I guess that's just how the Butthole Surfers roll.

Not an album that will spin often on my turntable, but I might return now and then for a bit of randomness.

[But 1001 Albums You Must Hear's claim that there hadn't been any heavier or wierder album prior to this one is just a lie, even based just on the albums listen in the book.]