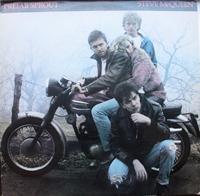 Oh.
While it's interesting to find a band that's been active for some thirty-four years without any images on Wikipedia, I guess it's not that that brings'em to the list, but instead it's the music.

And while they obviously know what they're doing, I'm a little bit too unimpressed by this very eighties album (I think it's mostly Paddy McAloons singing that dates it, though).
It's got a nice tempo, it's got some nice tunes and lyrics, but it's just so boring I can't get really involved.

(And, for you joining us from the U.S., this album's called Two Wheels Good there, due to complaints from Steve McQueen's estate)