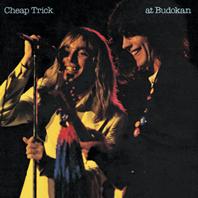 The term "big in Japan" fits perfectly for this band.
When Cheap Trick released their debut, practically noone in the English speaking world cared. Same with the sophopmore album. But for some reason they had a following in Japan from the start and it exploded with the singles off their second album, and the logical thing to do then is of course to go over there and record a live album in front of thousands of screaming fans.

This is full of the tracks you'ver heard snippets of for the last thirty-five years (give or take): Need Your Love, as well as I Want You To Want Me and Surrender shows up in so many movies, commercials and references it's almost ridiculous.

For a second or two I almost think Run To The Hills is starting, a bit wierd as that song's written five years after this album's release, but it's just Big Eyes (the only non-Cheap Trick track here is Fats Domino's Ain't That A Shame, by the way).

The album of course was a hit in Japan, but then also made its way to the Americas and the rest of the West too, giving Cheap Trick their international breakthrough.

Seriously, this is not a groundbreaking album in either style or sales, but if you want to chuckle a bit together with a kind of cheezy band and it's loud fans, Cheap Trick At Budokan could very well be the album for you.