0859. Country Joe And The Fish
Electric Music For The Mind And Body 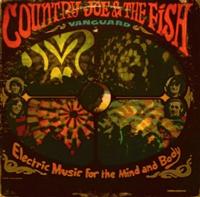 Country Joe And The Fish was a band whose name had references to both Soviet and Chinese communism. As a shocker they were also playing counterculture psychedelia with the occasional reference to LSD (who'd've thunk it?).

With a blues-based sound, embellished with psychedelia, they take pot-shots (see what I did there?) at the president (in Superbird) and sings tributes to other musicians (like Jefferson Airplane singer in Grace), and the result is somewhat mixed.

For the most part though,it's pretty neat stuff.