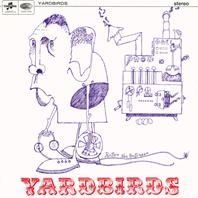 Another album of many names, the Yardbirds' eponymous fourth album also is called Roger The Engineer and can be found as Over Under Sideways Down, depending on where you got the album from.

But whichever version you get, this is good stuff.

This being the band that Eric Clapton left to join the Blues Breakers, you can probably audiolise (y'know, like "visualise", but with your ears) the sound right now: electric blues rock with damn good skills.

The bassline of Lost Woman, though "borrowed", reels me in and I'm pretty much caught for the rest of the album.
Over, Under, Sideways, Down (the song that gave the album its alternative title) they sum up the teenage experience with the words "When I was young people spoke of immorality, all the things they said are wrong, are what I want to be" and I guess that struck a chord with the contemporary youth.

Also, the first half of Turn Into Earth is almost Black Sabbath-esque in it's tone, and I have no illusions as to what was spinning on the turntables in Tony Iommis room all day. But instead of me ranting on about every track, I'll just say this: take a listen.