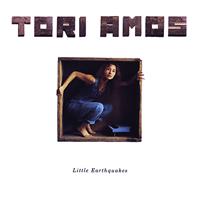 Remodeling the music when she went solo as her earlier synth-pop band went out of buisiness was probably the best thing Tori Amos could have done, cause this debut is (for the most part) several levels above that earlier sound.

The focal point is Tori and her piano. Whenever other instruments appear, they're just there as compaions, except for on Crucify where it's a full production.
And putting Crucify as the lead on this album was probably the best decison they could make, though, as it's a great enticer (with a crap video). The one problematic track is China, sounding like an outtake from Evita, but it's just a minor lapse.

And the strongest, by far, of the songs is Me And A Gun, and it's just ...damn. Here Tori sings a capella about when she was raped and what was going through her mind during the assault. Unsettling is probably the mildest verb I can use about it, but ...damn.

This is the first album I actually want to put a trigger warning on.