0772. A Tribe Called Quest
People's Instinctive Travels And The Paths Of Rhythm 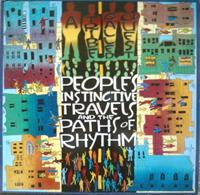 This is what I'd call synchronicity - the occurrance of causally unrelated events seemingly showing up together in a meaningful way. The two events in this case are (1) Swedish TV will air the ATCQ documentary this Friday, and (2) the Random Page Generator handed me this album just half an hour after I'd talked about (1) with a friend.

And what's the meaning I can infer from these two events?
Well, just that both as the beginning of a new calendar year and in anticipation of the list's fourth year going, this is a helluva kicker.

So the question remains: Can I Kick It?
Of course I can. I can kick it all the way to the GotToGets, cause it's a fantastic and jazz tinted journey. And whether it's trying to get people to have safe sex by cautionary tale (Pubic Enemy), just trying to explain why the hell you're in a Police station (I Left My Wallet In El Segundo), or dropping knowledge about the importance of voting (Youthful Expression), it's playfulness, mixed with severe chunks of seriosity, so I'm not complaining one bit.

Well, okay - just one thing then:
The difference between the vinyl and CD versions lay in two tracks that, even though good, sort of gives the album a stumped ending with the sharp cut at the end of Description Of a Fool instead of the slow ease down of Hem 'N' Eggs.
That's my biggest gripe with this, so you can see that this is some Native Tongue hip hop you got to have.