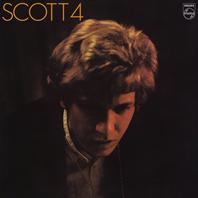 For his fifth solo album Scott Walker used his birth name, Noel Scott Engel, and the title Scott 4. Just to make it easier.

The title of track number seven, The Old Man's Back Again (Dedicated To The Neo-Stalinist Regime), is probably one of the more bad-ass on this list. How the song lives up to it?
Well, it turns out it does a pretty good job at it, though it falters and dives into overly emotional schmalz for about half a minute (when the soldier comes around). I'm impressed that he manages to do political pop with a funky bass. A bit of cultural refinement is delivered by the opening The Seventh Seal, based on the film by Ingmar Bergman.

A more even album than Scott 2, and as usual "more even" is code for "without the massive (potential) hit song, but also without the fillers". So, no Jackie, but two whole sides of good stuff.