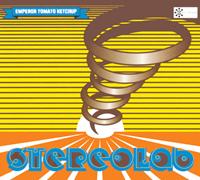 If it wasn't for one small detail, this would be one of the coolest albums, cause it's electronics fused with a band, it's named after a Japanese experimental short film from the Seventies (the feature length edit being released the same year as this album makes this lose bit of underground cred, though).

The instrumentals are just kicking, and here we have it: Lætitia Sadier's song doesn't integrate with the music. Problem is that the conflict isn't adding to he expperience, but instead diminishes it.

So, while still cool, it's cool with a layer of faux-sixties French pop over it, and that's sadly not so great.