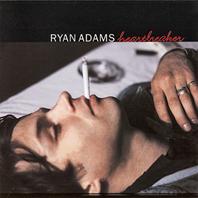 Second time Ryan Adams is on the list and this time it's with his debut, an album of quite agreeable alt-country songs.
[factlet: the title Heartbreaker is picked from a T-shirt Mariah Carey wore on a poster hanging somewhere near when Ryan was pressed for an answer to what the album was to be called]

Having Emmylou Harris sing background on Oh My Sweet Carolina is a nice nod to the predecessors.
Songs about a rambling life, mixed with songs about love makes for a traditional alternative country setting, and this time it's got that certain something that makes an album go on repeat.

This is a whole other ballgame than the follow up Gold.