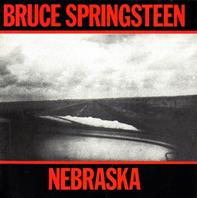 This is a review that I do believe might get me blacklisted from ever attending any of the Swedish middle aged media mens parties forever, but here goes:

Springsteen's Nebraska are songs for the American working class man (white), where family is everything but women are just extras - to be his and to protect. True that it's dealing with hopelessness and fatalism, but there's still Men Who Stand For Things (especially when there'll be hell to pay later on) popping up among the killers and tragedies.

But (and here's a big but), that basiclly means it's as niched as many other good albums. And soundwise the album's very well written even though it's basically just a demo with some post-production magic done to it.

While the boogie-woogie of Open All Night is, well, it would have fared better with a huge bit of Born to Run's production, the paranoia of State Trooper is fantastic. And compared to its inspiration, Suicide's Frankie Teardrop, it's a notch up in the lyricism department.

Highway Patrolman and the true-tale title track are pretty good too, but I can't help but wonder what the scrapped version of the album featuring the E Street Band sounds like.