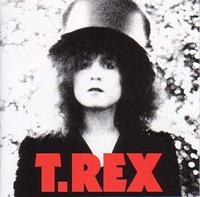 Coincidences happen! Yesterday's album is by the band that was the opening act on T.Rex's last tour, some five years after The Slider was released.
This is Bolasn second glam-album (the first one was Electric Wizard - if you remember?) and of the two singles released, Telegram Sam and Metal Guru, neither one catches my fancy. Instead it's the title track, with it's evasive maneuvers that's the peak here.

Otherwise it's a lot of songs with (dare I say?) fairly simple lyrics that at times seem to be written mainly cause he thought of a fun rhyme or allitteration (yes, technically tht's a rhyme too, I know), but as the music's very competent stuff it's okay.
T.Rex isn't really for creating a revolution, but for making you shake your stuff and to that goal Bolan aimed well.