0818. Stevie Wonder
Songs In The Key Of Life 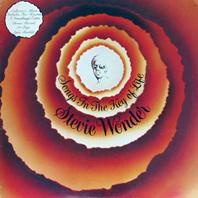 Okay, so this is a double album plus an extra EP?
Color me exited!
A lot of the songs have of course been covered / heavily sampled, but what's really impressive is how many of them that are truly good songs.
Seriously, this is one and a half hour of dynamite stuff.

After a string of highly successful, acclaimed and straight up great albums in the space of just two years (Talking Book, Innervisions, and Fulfillingness' First Finale), and considering quitting music altogether, it's no wonder that the label that could sign Stevie gave him full artistic freedom and resources to put out such a mastodon of an album.

The triple-whammy Sir Duke (a song that everyone's heard, bur a select few know the name of), I Wish (could it be funkier?) and Pastime Paradise (damn you, Coolio for using this!) are just killing it, and then you realize there's more!

Fascinating sidestory is they've actually credited everyone involved, creating a list of some one hundred and thirty-three people, from Wonder himself to the cooing and crying baby in Isn't She Lovely, via everyone singing backup on each and every track. Longest list Iäve seen this far, I think.