0870. Tom Waits
Nighthawks At The Diner 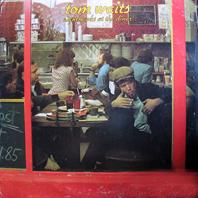 Previously, we've only heard from Tom Waits' clunk-years, so this is a step back in discographical time to his jazzy barfly days. Here, it's his third album (and a live one at that) where he's the storyteller with a crooked smile and the most refreshing part of this is the complete lack of sob-story sentimental strings.

Instead it's smokey, blues filled jazz, taking you into the speakeasy and out into the ghost world of Waits' mind.

While not live as in out on a gig the album was recorded in two takes with an audience sitting in, laughing and cheering along. The inbetween song banter is full of Los Angeles '75 in-jokes, so the audience whoops while I'm sort of lost for the most part (the dirty joke I get, though).

Great album, almost so good I wish he hadn't switched to the more erratic sound (but only almost).