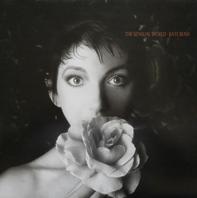 Opening with the sound of chuch bells, Kate Bush is back for the third time. And while still not as far-reaching vocally as on The Dreaming, she's still going beyond the intellectual horizon, using Ulysses as inspiration for the title track (at first intending to have the actual book passage as lyrics, but getting denied by the Joyce society until just about last year when she re-recorded the song). She also went for a bit of tricksterism as the single version of the song was a double-grooved vinyl, i.e. two parallel grooves containing either the full song or the instrumental, depending on where you put the needle down (something The Residents also planned to do, but skipped).

While the other songs on the album might not all have such esteemed inspirators, it doesn't mean they're something thrown out without a thought - au contraire they're thought through and in at least one case kind of predicting the future.
Cause listening to Deeper Understanding's narrative where the protagonist "turn to my computer as a friend", I feel slightly compelled to close Twitter for the evening.

I once again find myself longing for Ms. Bush to throw herself into the guttural from the heights of her pitch just once, but it never happens.
More of a unified (or maybe just less of a shattered) album, The Sensual World is better than the Hounds Of Love, while not reaching the creative heights of The Dreaming. Still, that's a pretty high grade.