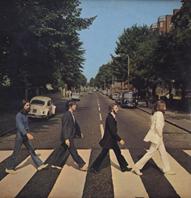 Now this is the Beatles album to listen to! Notable cause it's the last album The Beatles ever recorded as a group (even though released as the second to last) and for being the only one featuring a track with a drum solo (congrats Ringo!).

Opening with Come Together (with "borrowed" lyrics from Chuck Berry) it drags you along pretty much instantly and it keeps going with Something and the serial killer story of Maxwell's Silver Hammer. I almost wish I didn't have to join the fray, but Octopus's Garden? Really? Sorry, Ringo, but it's kinda clear why you didn't get so many songs on the previous ten albums, dude.

The proto-psychedelia prog of I Want You (She's So Heavy) is the albums longest, heaviest (and possibly best) song. Sparse lyrics and rich in moise it's juxtaposed with Here Comes The Sun, relying on a pretty melody and cheery lyrics to reach the top of the charts and being a staple of nostalgia radio stations of the Western Hemisphere for ever. The medley that takes up the lion's share of the B-side is, like medleys are prone to be, both high and low.

One of the earlier examples of adding a hidden track, Her Majesty's appearence was actually by mistake as it had been cut by the band, but then re-installed by the technicians.

Strange, though, that an album repeatedly called "the greatest Beatles album" (and yes, it actually is better than Sgt. Pepper's) gets just one column in the 1001 Albums book. Kind of weak, actually.
(and lo, it's been three hundred albums since we last heard 'em, on Rubber Soul, so I guess it was due they re-appeared.)