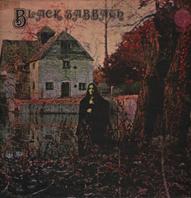 Ominous is just its nickname, and true to metal form this is an album made by nerds: Wizard is inspired by Gandalf from Lord Of The Rings, and women are seen as a mystic and dangerous entity (see Warning and the cover of Crow's Evil Woman). Of course it was cut below the knees by the reviewers of the time (most of which has since eaten crow, even though they were right about some of the dumb lyrics).

And as we've seen before there was already heavy metal and proto-metal stuff around with Blue Cheer, Iron Butterfly, even sneaking in a talon on pop stuff like The Pretty Things, and even freakin' Billy Joel released a metal album (while not heavy in any sense of the word) before the Brits, but none with the same impact on the genre and music in general (hell, I even named one of my basses after Geezers intro to N.I.B.).

This eponymous debut is probably (directly and by proxy) responsible for more shouts of "turn that racket down" and "I think my son's a Satanist"-calls to the local vicar than any other album on this list, so congrats, Sabbath, you've got your second GotToGet.

Fascinating thing is, they managed to follow this with an even greater album.