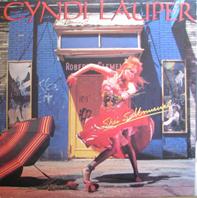 Four of the seven singles hit the top five, and as two of them has already been mentioned here, I'd better check the two others too.

The obvious one is Girls Just Want To Have Fun (which definitely is a defining eighties song), which I think all of you know already, and finally All Through The Night - a track that really isn't at par with the others as it's not as much irreverent synth-infused pop-rock or pure ballad, but something in between.

(as an interesting aside, Lauper also performs a cover of the Betty Boop track He's So Unusual in a very Cyndi/Boop way)