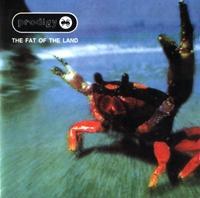 Fun fact: I bought a bootleg copy of this in Bulgaria back in the day.
The Prodigy's third album met with a bit of controversy due to the third single's sample of the Ultramagnetic MC's line "Smack my bitch up" (in the track with the same name) and it's less than easy going video (by fellow Swede Jonas Åkerlund, nonetheless). It also prompted the Beastie Boys to ask The Prodigy to not play it during their set at a festival both bands were playing.

Speaking of Ultramagnetic MC's, Kool Keith makes a guest appearence in Diesel Power and gives a good example of a good collaboration.

On the reverse end of the scope, I can't really grasp who thought it was a good idea to bring in the tosser Crispian Mills (from Kula Shaker) on Naranyan. He just sounds like one of the Gallagher bros (which actually fooled me for years as I didn't have the correct tracklist), so I'm wondering if The Prodigy aimed at copying the Chemical Brothers', but had to opt for a cheaper alternative.

But going over to the best track we've got Mindfields (later on used on the soundtrack for The Matrix), with a creeping feeling building up to a sincerely great dance track.