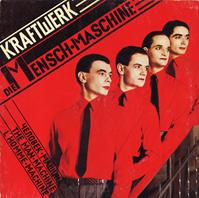 With Die Roboter/The Robots and Das Modell/The Model in the tracklist, this is probably one of the most Kraftwerk albums of their discography yet (yes, I know I've used similar statements before, but give me a break, okay?).

Where Trans-Europe Express still saw them exploring the Earthly plane, Die Mensch-Maschine/The Man-Machine is where they really abandoned the human side and became machinery. The lyrics of the album, while sparse in some tracks, describe pseudo-existances, only reacting to others' actions and instructions.

And I'll have to admit that the English version of the title track gains a dimension in the re-written lyrics, even though they're just a couple of lines long (so that's why you haven't heard me whining about the book not reviewing the original this time).