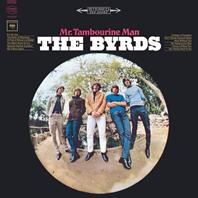 Yesterday's magnificient album was made in competition with among others The Byrds and this sound. But where Love took it along a fantastic route, The Byrds kept it fairly generic (well, as they were the first major folk-rock band one could argue that their sound was the template for what actually became the "generic brand").

Starting with, and naming the album after, a popped up Bob Dylan track released just months before, this might not be the bravest debut. And along with a third of the tracks being Bob's songs it might seem they're more of a cover band.

That assumption would only hold if their own tracks were fillers though, but as Gene Vincent's a competent songwriter they're okay. The biggest miss is actually the final cover (or version, if one's so inclined): We'll Meet Again, a song that I think the amount of people that has made a decent recording of this is a handful, tops - at least while trying to "make it their own" instead of the pub version.