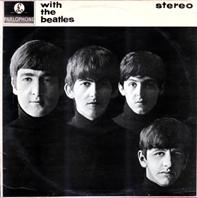 Back for the fifth time on the list, it's The Beatles with their second album (a trimmed down version of which became their first U.S. album). And this is of course their Bieber-period, when they were primarily riding (and amplifying) the Beatlemania.

[realizing I almost started to write the exact same review as for A Hard Day's Night, I promptly scrapped a lot of it]

This is a Beatles album where I think "special" songs are missing, sure: a couple of them have been revamped as nifty cover versions, but in their beatle-forms they're sort of tame (and yes, I know it was nineteen sixty-three and I'm repeating myself). Yes, even All My Loving.

I find myself wondering what the heck Ringo's up to in the slow parts of All I've Got To Do, cause that drumming's not the usual stuff you'd hear. In other words pretty interesting.
An okay album, but beatlewise it's on one of the lower rungs (except for the cover shot, which has been imitated by more bands and people than you could shake a stick at).