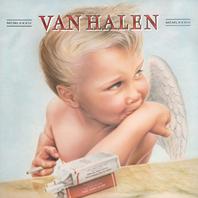 Second time on the list, and with a just about an equally as good album as the debut, Van Halen has changed a bit.
More synths and a smidgeon less guitar made this their biggest album to date (and I guess Eddie's collaboration with Michael Jackson for Beat It didn't hurt their reputation either). This proved to be the last album with singer David Lee Roth, as tension between him and Eddie Van Halen climaxed and he was out.

Panama and Hot For Teacher were two of the hits off the album, but the one that caught me was I'll Wait, the slightly melancholy song about waiting for the sweeheart - until you actually listen to more than just the chorus (which took me a couple of years). He's professing his love for a centerfold.

The biggest song, though, is Jump - a classic rock track with an infectious synth that belies the message of just give up and kill yourself.