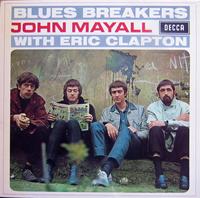 That doesn't mean it's a sloppy piece of work, though, cause it's good. They know what they're doing and with such skill that it seems almost effortlessly done.

However, I like Clapton better when he's embedded in harder blues rock (like Derek & The Dominos), where his guitar licks really blaze across the tracks (like Cream - which Eric and fellow ex-Bluesbreaker Jack Bruce formed just after this album), so while this isn't the sharpest high-note on the list, it's still a fully acceptable album.
Without it, there might not have been a whole lot of good music created in an attempt to copy it.