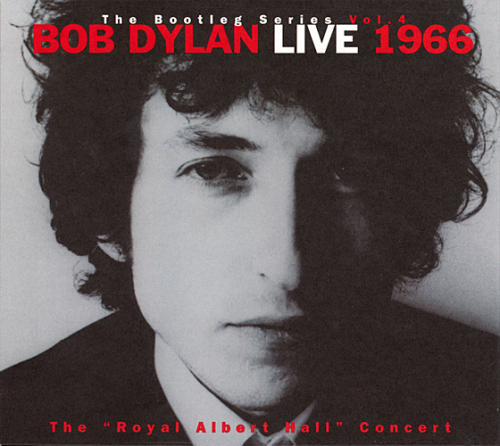 In spite of being labelled "The Royal Albert Hall" Concert, this was recorded at the Manchester Free Trade Hall, but that's the thing about bootlegs: the info's often as shifty as the meta tags of an MP3 from '98.

This is a live set from his tour backing Highway 61 Revisited and promoting Blonde On Blonde and thus there's both acoustic oldies and the newer electric stuff.

His voice breaks at times, but mostly he's brought his vocal A-game (yes, so he's mumbling a bit too, but you know). Still, the acoustic songs sort of diffuses into each other and by the third one I find I've lost track. A strange feeling.

It gets better when The Hawks (later to be known simply as The Band) comes on stage and plugs in after some forty-five minutes.

What really makes this a notch in the bedpost of music history is that it showcases the flac Bob received for going electric - there's boos and hisses during the plugged in half of the set and even though he wins most of the hecklers over (good music tends to do that) it still continues for far too long - culminating in some dumbass calling him "Judas" right before him and the band Like A Rolling Stone (after a nice rebuttal from Dylan).

But apart from that it's once again Ballad Of A Thin Man that steals the show, and I don't even know why they bother to continue after it - even though knocking down hecklers is fun.

[Just a couple of lines about how 1001 Albums… handled it:
First, they got the wrong title (only calling it "Live 1966"), but this time they've actually used the proper release date for the listing year, inadvertently causing the inverse problem their counter-chronological review of Sam Cooke had, cause this is an album that's been around since its recording, bootlegged for decades and inspiring musicians since the start.

At least the electrified half.]