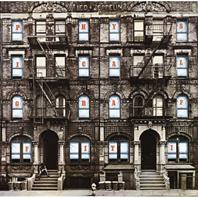 For their sixth album Led Zep had abandoned numbering a while ago and instead started giving the releases proper names (sort of). This is an unintended double album as the recording sessions produced more than would fit onto a single disc, so they pushed in a couple of songs left over from previous album sessions.
A move that's not always the greatest as Black Country Woman seems more like a quick demo than an actual album song (Bonham's drumming is almost amateurish on it, or someone doing the final mix managed to mess up big time).

On the very positive side, though, they've moved away from the worst folksy notions and focused on what they did best.
Even though the heavy, orchestrated, and later on sampled, Kashmir along with Houses Of The Holy are the most renowned of the tracks on Physical Graffiti, the tiny riff of the bridge in The Rover is so irresistable that the whole song's lifted by those few seconds.

This might be their finest hour (and a half).