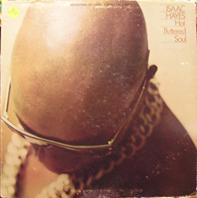 A release that was the pivotal make or brake second album after his first album sort of flopped, Hot Buttered Soul became the former: Isaac Hayes big break through.

With two covers and two original songs, this isn't someone trying to sell by releasing singles, but instead, just as on Shaft, aims for the composition.

Burt Bacharach's Walk On By gets an extensive makeover that washes away any and all of the upbeat facade of the original, bringing out the sadness of the song.

The one passage where the album actually could have used someone stepping in and saying hold on a minute, let's redo this thing is when the chorus girls sin the title of Hyperbolicsyllabicsesquedalymistic as it sounds as if spliced in from another album. But that's just an aside.

In the version of the country song By The Time I Get To Phoenix it takes him almost nine minutes to get to the actual song, talking over a cymbal keeping pace (and an organ note peeking in). A fascinating move indeed.