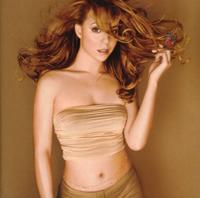 I think this is just so boring.
Yes, Mariah can sing the high notes to drive dogs mad.
She's also go the most popular producers her disposal and yes, Sean "Puffy / Puff Daddy / P.Diddy" Combs and Missy Elliot are two that appears.

This is probably more interesting as a turning point in Carey's carreer as she both went from the "cute girl next door" to the femme fatale (with the help of the video for the single Honey), and from following where the management pointed to taking on a bit of the creative process herself.
But it still doesn't make Butterfly a very interesting album to listen to.

One thing, though: at first I think The Beautiful Ones (with Dru Hill) could have been a Prince cover, cause it sounds like a knockoff of the Purple Rain album. Then I of course realize it, in fact, is a cover of a Prince track, off Purple Rain.

(and by the way, I think there's been a mistake somewhere, cause the international version of the album ends with a "def Club Remix of Honey, but all I hear is typical house. Where did the defness go?)